ESP Effects for Close-Up or Cabaret by Paul A. Lelekis eBook DOWNLOAD

Paul A. Lelekis presents 8 tested, real-world ESP effects for Close-Up and Cabaret… even stage performance. Perform an entire, amazing show… out of your pockets… with PIX!

1) Fantasy Jacks – one of Paul’s favorite effects… and it’s easy to do! The four Jacks are placed into the empty card case. Two selections are made and lost in the
deck. The performer asks the spectator to choose three of the Jacks… when the deck is spread, the three Jacks are seen “sandwiching” the two selections! But that’s not all!

When the card box is opened by a spectator, the lone, unchosen Jack is found inside!

Learn a professional secret that will really “UP” your game!

2) Telepathic Spectator – This effect is ingenious… and is one of Paul’s favorites to perform – and it is so much fun to perform! Paul has performed this effect for over 25 years. A husband and a wife peek two different cards – no force! The magician then mentally divines the husband’s card…and, well…he was supposed to! But then…the HUSBAND divines his WIFE’s freely selected card! Neither the husband nor the wife will have ANY idea how this terrific effect works! Use for family members, friends, boyfriend/girlfriend, etc… this effect is brilliant!

3) Time After Time – A spectator writes down any time of day she wishes… to the minute – and, yet the performer divines her thoughts! A very powerful routine!

4) Watch After Time – A spectator writes down any time of the day, and then another spectator takes a watch and spins the dial stem to any unknown time. The performer then writes a time down on another pad…the performer’s time, the spectator’s time, AND the time on the watch ALL MATCH! WATCH THEIR FACES! (NOTE: I have had MANY women rush up to me and ask me how this effect is even possible – and “…do I have ESP?“) This is the honest truth! NO gimmicked watch is used!

5) Triple Revelation – This impromptu effect is AMAZING! It is Paul’s rendition of a
famous routine by Al Baker…only this effect DOES NOT require a special deck (deck can be borrowed!) and DOES NOT require two forces! A TRUE magician-fooler!

6) Impromptu Book Test – This amazing and easy-to-do book test is real winner! It is based on a Richard Himber effect… except this is one is impromptu! Go to a party or someone’s home and if there are books there, you can perform a miracle!

7) Trio Predicto – A prediction is made. From a shuffled deck, the spectator is allowed to choose 8-12 cards… any cards he wants – NO FORCE! The cards are given to the spectator who puts them into 3 piles… the top three cards match the predictions!

8) Double Prediction – This Nick Trost effect (with Paul’s addition and patter) is a fun way to include the spectators into your routine! The magician makes two predictions and the spectator then turns a card over and sticks it ANYWHERE in the deck. This card is found between the two predictions! The cards are NEVER controlled by the performer…and the patter is hilarious! This is a great routine to add to your repertoire! This just one reason why Nick Trost was considered to be a genius!

Be the first to review “ESP Effects for Close-Up or Cabaret by Paul A. Lelekis eBook DOWNLOAD” Cancel reply 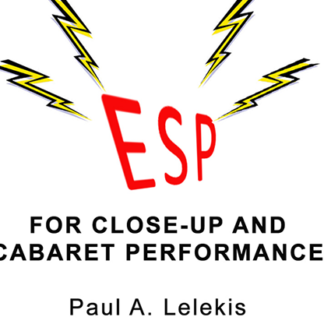 You're viewing: ESP Effects for Close-Up or Cabaret by Paul A. Lelekis eBook DOWNLOAD $10.00
Add to cart