View cart “Just In Case by Iain Bailey video DOWNLOAD” has been added to your cart.

A Poker Deal & An Exposé of TILT by Paul A. Lelekis eBook DOWNLOAD

Including the real deal on “The Trick That Fooled Houdini”

“When I met Paul many years ago I was struck by his intensity. He was deeply interested in the potential ‘horse-power’ of strong or subtle methods. He sought ideas that drive magic past thresholds of self-satisfaction, and whenever he performs you detect this energy. Paul embodies the spirit of the hard-core professional. He never stops mulling over ways to vary, tweak, modify, and perhaps improve every aspect of what he does. I am pleased to call him my friend.”
– Jon Racherbaumer

MALLEABLE POKER DEAL – An amazing 3-part routine with a Poker Deal that will DAZZLE everyone – including magicians! This routine can be performed by almost anyone.

FIRST, a five-handed game of poker is dealt and the dealer displays that he can deal bottoms, seconds, and center deals at will…he then deals himself the four Tens!

SECOND, the dealer asks a spectator, at which hand is the shill supposedly sitting, the 1st, 2nd, 3rd or 4th hand…the 5th is the dealer’s hand. When the spectator calls which hand of the four, the entertainer immediately deals out a Royal Flush to that hand…and even CALLS which SUIT, BEFORE he deals! This is one of the most amazing aspects of ANY Poker routine!

THIRD, the Magician says that the Deuces are wild! He deals out a third round of cards and deals himself the FOUR ACES and a DEUCE! This hand even beats a Royal Flush!

This Poker Deal is VERY easy to do… no sleights needed – in fact, even a rank amateur can perform this!

For those who are a little more advanced – you will now have the opportunity to appear to be a REAL Card Mechanic!

The fun and amazement factor is what makes this beautiful routine, so incredible to your spectators!
ALL PATTER IS INCLUDED!

EXPOSÉ of TILT – Learn from Jon Racherbaumer… one of the “Greats” of our time. This 10-page treatise discusses one of the finest sleights in the world, Marlo’s TILT and also its predecessor, The Depth Illusion by Dai Vernon. Learn all about the many intricacies of this sleight. Understand that there are not only many different situations to use this sleight, but also many different ways to use it!

Learn Vernon’s most famous of tricks that he performed for The Great Houdini (then billed as The King of Cards)… and fooled him BADLY – when Vernon was just a young man!

This is the routine that Vernon most probably performed. Trust me… you will even fool card Pro’s of today with this trick!

Be the first to review “A Poker Deal & An Exposé of TILT by Paul A. Lelekis eBook DOWNLOAD” Cancel reply 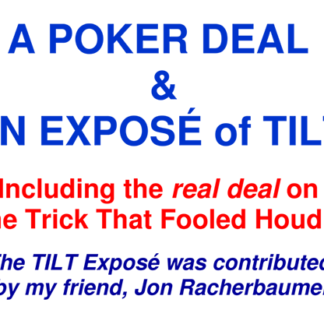 You're viewing: A Poker Deal & An Exposé of TILT by Paul A. Lelekis eBook DOWNLOAD $6.00
Add to cart