The 88 Beast Assembly is full of surprises. Four Kings are placed on four different parts of the table. Three indifferent cards are then placed on top of each King. Three Kings disappear very cleanly and are found joining the leader King. The magician snaps his fingers and the Kings are transformed into the four Aces… but wait. Where are the Kings? They are all back in their original places. This is a killer. The 88 Beast Assembly was the very first effect that Fenik performed for Larry Jennings in 1989. This is pure magic — magic that you can do everywhere.

Download this amazing video and learn to perform this knock-out effect! 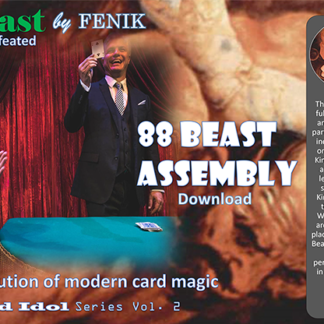